Is there sex discrimination in the animation world?

Is there sex discrimination in the animation sector?

It is a subject that is quite close to the reality in 3D Wire of 3 years ago, where it is talked about the difficulty of incorporating young people into the world of work. Some women attending the talk in their turn spoke the lack of female talent in animation studies and that led to the wage gap in the animation sector.

Brave, Pixar movie, where there is no love relationship and the protagonist flees from being a princess. In fact, co-director Brenda Chapman had her more and less when Disney wanted to turn Brave into a little princess.

Is this a reality? I’m sorry I do not have the answer, the only thing I have is my experience with Hampa Studio, where never, never the wage discrimination has been by gender, nationality, race, religion or age.  But yes! we do discrimination on species, we tried to put on monkeys but they did better than me and they were dismissed immediately. (You will see that by this joke, I will receive complaints from animal advocates).

Why there is no discrimination in Hampa Studio,  Basically, for a moral issue and personal convictions. We, Hampa Studio, is a medium study, we have our stipulated salaries for each position of junior, middle, senior, supervisor, director, Jedi Master and Master of the Universe, and the amount varies depending on the department and especially the project. There is no reason for “human person” (what the cañita brava would say) to pay less for a woman than for a man doing the same job.

Currently, in the studio, at this time, we are in the same number of women as men and more women are being included in production now. We also have had many women in different positions, managers, and responsibility. When we do recruitment, we only look at experience, skills, talent, and attitude, we do not look at anything else. We do not look at or degree (If you are young and you are reading this… we look at the degree, it’s a joke … study!)

Moana Film, the protagonist is a woman without a princess’s aspirations and there is not any sentimental relationship.

To contrast opinions and experiences I have look for artists and producers who have wanted to jump into this topic and I thank them for giving us different visions, although it must also be said that there have been great artists from very powerful international companies. They have refused to give me their opinion. In the purest style“Let’s not get involved in that …” – Rajoy style  😉

Speaking with Nathalie Martinez of Wise Blue Studios, a producer of great international reputation, with an abroad career in the film industry, and an expert on the stage of Annecy, 😉 she comments: “… the existing inequality, from my humble point of view , it is more a generalized tendency of late access of the women to eminently technical professions than to a will of the sector and its members … “She likes me to believe, “… that ours is a sector of creative spirit and, therefore, with an open-minded majority, where a greater female presence is not only welcome, it is expected and searched too.”

In addition to this opinion, Lorena Ares, a great director of animation and with more than 13 years of experience: “I have not suffered discrimination in particular. I suffered more when dealing with builders who thought I was the girlfriend of one of my partners, or they told me that I had to keep my hair neat and dressed in a skirt suit instead of pants. In animation, I have always been treated like a human being with ears, not with boobs”.

In this same line but more forceful is Belli Ramírez from Mr. Cohl the producer with more animation productions behind her: “From my work experience, I do not think there is salary inequality. Posts are remunerated by experience, not by gender. But I insist, that is my experience, in our sector I have not seen it, but in most sectors, this exist, we can consider ourselves lucky.  For emphasize, I see that there is inequality of another kind, as we are invisible many times and prefer to choose men for positions of responsibility”.

She also agrees with Nathalie that there are no women in the management and supervision positions due to their late incorporation into the sector or to that type of position. 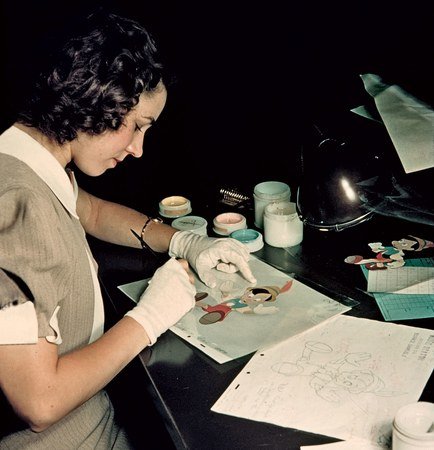 Ink & Paint. Formerly, it was the only workplace that the women could accede.

But no, not everything is of Rose’s color, Elena Gobernado the strongest and important script editor of the sector, she is much sharper: “Yes, there is discrimination in the sector, not so much for being animation, but for the obstacles and Social prejudices of the Spanish culture. The managerial and responsibility positions are usually occupied by men who prefer colleagues who are accomplices on the experience and talent. I must say that this is changing or the same is because I already have a resume that supports me. On the other way, investors are usuall menand for some strange reasons prefer to trust their money to another man…”

The  Elena’s opinion, and with which I agree with things I have heard, is that the woman’s salary has always been treated as the supplement of a home, not the sustenance, in fact, she tells a situation that highlights this reality:

“I asked for a salary increase (the reasons or the stories, to this day I don’t even know how I kept the rhythm). He did not answer me. He asked me what my partner worked for. I told him that he was an engineer. He answered that then it was covered. I expected a little that there were people who needed it more. No comment. I left. “

Belli adds that “… In conferences and roundtables, men are almost always invited, in a few conferences of animation you see the same amount of one as of others. I think that women still have less visibility and those who organize the talks do not take the time to look for them. One year in Animayo, we were only women, but this should not be an isolated case, and we should find people of both sexes in the conferences. “

“… This phenomenon, more than gender inequality, made reference to the education that had been received until then because the mentality was that a woman had more sensitivity, precision and delicacy to color the drawings. The woman had more patience or was more organized than a man”,  says Ignacio Meneu, an authentic dinosaur of animation (in experience, not in mentality or age … with how big it is, it catches me and bursts me!) And continues …” Luckily this mentality is changing and now I think that in animation there is no inequality between men and women, but he said, that old mentality or education is changing, that is, it has not changed enough yet and we continue to miss or make it news when an animator is a woman or is a developer for video games or simply directs animation. “This statement is perfect with Belli’s appeal to all women -” Women have to do more strength, in general, encourage you to study more technical positions. It would be great, to see more women in the technical part, in CTO positions, technical direction, networks, systems, etc … “ Mulan, A woman who becomes a warrior and then she has a relationship the roles are changed.

As an optimistic closing, Nathalie, Lorena, and Ignacio point out that in one way or another more and more women are seen occupying important positions in the entire audiovisual pyramid and are highly valued, an affirmation with which I totally agree.

Elena as a good creator gives us some indications of how the creators can help  in this change:

“I think that as generators of content that reach millions of people, and above all children, we have a social responsibility with capital letters, it is in our hands with the commitment to create content without harmful gender stereotypes, with well-distributed roles and dialogues. that exclude phrases like – you cry like a girl. The message we throw can help to improve the rights of girls and women in the world, or at least to reflect, as it should be Like Flavita banana says, women don’t want us at their feet. They want us to their height.

… Finally, Elena invites us to put our content to the test with the  Bechdel test,  she analyzing if our productions meet these three requirements to overcome the gender gap:

A variant requires that, in addition, the two women are named characters.

Look!, what movie passes the test !! Frozen written and co-directed by Jennifer Lee.

My God! I already tell you, It was difficult for me and some of our productions (I say some, not to say almost all) do not pass this test, therefore we have to improve a lot!

I know that women face many obstacles at a professional level (especially the 100 meters hurdles runners), but it seems that this is changing, although there is still a lot, a long way to go, together we can do it… !! Let’s be strong!!!

Final note: As this is only opinions and not categorical statements, we leave open the comments of this post, without any censorship so you can comment, discuss and share anything you want, as long as you do not put us in a mess, (we know each other..accusing someone, insulting and these things that cool a lot of social networks 🙂