WHY IS OUR NAME HAMPA STUDIO?

The other day somebody asked us on Twitter “Why do we call ourselves Hampa Studio?” It wasn’t like a good idea to have a name like Hampa Studio, for a Valencian studio, and to tell the truth, he was right, with all the corruption and the semi mafia-like state in which we have been living in Valencia.

No, do not exalt yourselves !! I know you … We are not going to talk about politics, to outrage you already have Facebook! I’m going to take this tweet to tell you why we call ourselves Hampa Studio? since many people ask us. (… mmm at least … one or none).

Daniel, ours is a pure unconsciousness, we devote ourselves to the animation… in Spain!

TWO FOOLS AND A DESTINY

The company, my room at my parents’ house, and our professional ambition, waiting for my parents to go to sleep to raid the furniture bar, so we said… – “well, come on! for the short time this is going to last, let’s give it a cool name… LEX LUTHOR, the bad guy from Superman! “Yes! I know, smart guys…! it’s LEX LUTHOR, but thanks to our extensive experience watching that trial show on Telecinco, we said: “Let’s remove the ‘H’ and with that… there’s no legal problem at all”.

Image of Lex Luthor with the flag behind him. He looks so hot… I could plant one on him!

Image of Lex Luthor with the flag behind him. He looks so hot… I could plant one on him!

WE SAW IT COMING!

A few years later, in 2004, the studio had grown vertiginously, there were already 3 of us! and we didn’t know what to do with the money (buy toilet paper or a mouse for the new child).

Faced with this wild growth, we saw that we were serious and decided to register the name LEX LUTOR at national and European level, we were the masters of the world!

Until one day the phone rang…, a call from the court to pick up a claim! Just like that!

I went to the court with the feeling that I would go in but never come out. I asked the official on duty, who had a mountain of papers the size of a 7 year old, and he nodded to me. This guy knew the case, I still shit myself. He started looking through that pile of papers. I thought he was looking for our little papers, but after a while, he said: “OKKK! That’s it!”  He grabbed a piece of elastic and gave the pile of papers a couple of turns. “Here you go!”… WTF!!?? THE WHOLE FUCKING MOUNTAIN was the demand. I thought… “Fuck, what have we done? Well, or rather, “what or who has found out everything we’ve done?”

To give you an idea, about a thousand pages (like the Malaya case). Almost all the lawsuit were comic pages, as proof, where Lex Luthor appeared, and it was headed by a page that said “Plaintiff: DC Comics Inc, directed by Dr. xxxx (I don’t remember the name, I only remember the Dr., because a hypochondriac like me, doesn’t forget them), located in Broadway street in NY (USA), against LEX LUTOR SL, directed by Alex Cervantes and Javier Moliner in Mariano Benlliure street n 6, Alfafar – Valencia – (Spain)”.

The header alone was already an ode to the half-turned, running punch, but where I really got dizzy was with the 8 subsequent pages with all the names of the lawyers. There were more names than on the Photoshop credits. 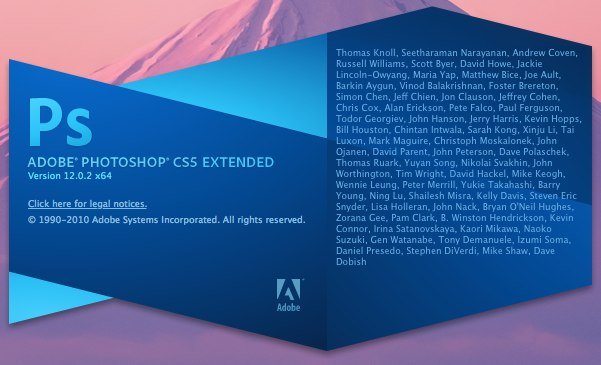 The credits at the Photoshop, with Thomas Knoll, who always comes first.

The DC (we called it that way because it was already like family), demanded 50% of the total turnover in those 10 years of our existence. They claimed that this 3-person empire had been built under the name of Lex Lutor, (or as we were known to our clients at the time: “Lex…, what?”). And, of course, we were asked to give up the name.

It was then that we looked for the best/only lawyer among our colleagues with time on their hands. His first two sentences were: “You’re going to get it in the neck” and “I’ll take care of it, I’m only one subject away from finishing my degree”. With these two statements we saw ourselves in jail! It was then that we decided to do what colleagues and honest people do, to look for a real professional, without telling him anything and without answering his phone calls for weeks.

At the end, a month later, and after a tense meeting with “only” 4 lawyers from DC Comics (they were unable to charter two flights), we were in retreat from everything, but we still couldn’t pay the amount they were asking for.

Sometimes I think about it…, either they felt sorry for us or they weren’t sure they could get rid of our name. I think it was both, but with the fear they put into us, we would have signed “The right of the first night“over our mothers if they had asked us to.

WE NEEDED ANOTHER NAME

Obviously, after this, another name had to be found, an evil one if possible.

Something generic this time please! We couldn’t screw it up again. We considered several names, among them “The Crime Syndicate”, but it was a bit strong… – “Hello, you’re talking to the Crime Syndicate. How can I help you?” Mmmm, buff, no, it didn’t seem like a good idea. We also came up with “Cabeza de Caballo” (the logo was a horse’s head cut off on a bed and all covered in blood). We still used this name years later, for a small graphics department we set up within the studio, but at the time it didn’t suit the name of the company. We needed something more international and less crude… In the end it was HAMPA STUDIO.

Well, you know why we called ourselves Hampa Studio. Now at least we’re not being sued anymore. The worst thing that happens to us is that we are sometimes confused with an association of mothers and fathers of students (known as AMPAs in Spain).