The animation and the bike

The animation and the bike

I still remember when my father taught me how to ride a bike, we were in my chalet, I will never forget it. Over the years I perfected the technique, I not only opened wounds in my knees, but also in my head, and I went everywhere with my bmx, trying to emulate the BMX Bandits until one day I fell madly in love with cinema and cartoons. I left the bike little by little and I locked myself at home to draw and animate in the corners of the pages of all the books I could find, starting with the school books and ending, literally, with a new encyclopaedia that my parents bought for themselves. I never understood that slap in my face, the animation of the kame was awesome!

In 1997, after working in some studios, I decided to set up my own studio, Hampa Studio (at that time under a different name), and fuck up other people’s books. Since then my life has revolved like a zoetrope, always around my great passion, hobby and suddenly, one fine day, my job.

As expected, the working days were at least 12 hours long, holidays were just enough (falling dead face down in bed and lifting my face from time to time to be able to breathe), and weekends were the perfect time to be alone in the studio and to advance my work. In front of my family and friends, it wasn’t an obsession, it was my job, I had finally become a responsible guy, but in reality I felt like the psychopath who joins the war to have an excuse.

Before setting up the studio I was really cool, (independently of my hours drawing and dodging my mother’s trainers), I had a pretty active social life, travelling, going out with my mates, playing videogames, going to birthdays, training, going out at night, the odd car crash, complaints from the Guardia Civil…, the usual stuff.

I forgot all that because of my great dedication to my profession and my desire to tell stories. Besides, I also tell you that the documentaries about the big studios didn’t help much, the more I knew about them, the more I worked. What? John Lasseter was sleeping under the table while he was working on his first 3D project?! Well, I’m going to sleep under the table at Ikea. If John does it and look how cool “Cars” is (joke for those in the industry!), then I’ll do it too!!!

Then I found out that the guys from Pyro Studios, when they were making their first videogame “Commandos”, spent a whole year without leaving the studio. Well, let’s go… to set up a 15M in the office, let’s not say it!

Then came the death of Steve Jobs and I thought that… there was no need to imitate everything. 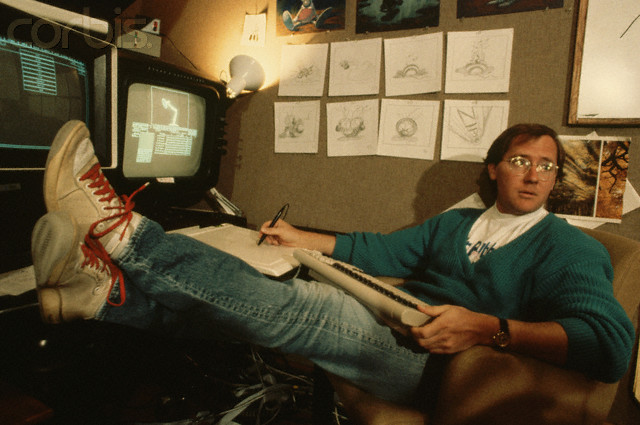 This is not me, this is John Lasseter when Steve Jobs caught him with his feet on the new table.

As the studio grew, my social life and my classic brown skin were falling into a downward spiral. But for me the most important thing was still the studio, and that’s how it has been until this year, when, looking back, I realised that no matter how hard I have worked, no matter how hard we have worked like beasts, the studio has been growing at the pace it needed to grow. We’ve had bumps, successes, failures, successes, problems… I still haven’t been able to make the film I want to make and it hasn’t been influenced by the fact that I’ve been cloistered between computers and light tables, with my underpants like muffin wrappers.

Now my working hours… are still not only 8 hours, let’s not go crazy, but they are no longer 12 or more. I take my daughter Leia (I know, I know! …we’ll get to the geeky stuff another time) to school every day, I get home early in the afternoon to go with my wife and my nanny to the park with her friends from school and at weekends I enjoy my family, my friends, a good bike ride and sleep (that last thing I do so well, I’d say it’s what I do best).

Finally, with all this I have come to the conclusion that it is not by working more hours than the clock that I am going to reach the top. What you have to do is focus your efforts, take your time to choose good stories to tell, keep your eyes open to everything that happens in the sector (which you can’t do when you’re totally exhausted), don’t be afraid of failure and, of course, take advantage of good ideas and opportunities without blinking an eye.

So… I encourage all of you who are starting out in this sector and are crazy enough to set up your own studio. Be very brave, but don’t go overboard (we know each other!). Take a rest. When you are working, do it to the death, but don’t leave your life outside of work to one side. I’ve been lucky, because my people are still there, but with a behaviour like the one I had, no matter how much you have become Pixar, you will be left with nobody, and that’s when you will have had the biggest failure you can have in this life.

By the way…., all this talk I’ve given you was basically to tell you that on Thursday afternoon I taught my daughter to ride a bike. I’m happy because it’s something that she will never forget… and neither will I.